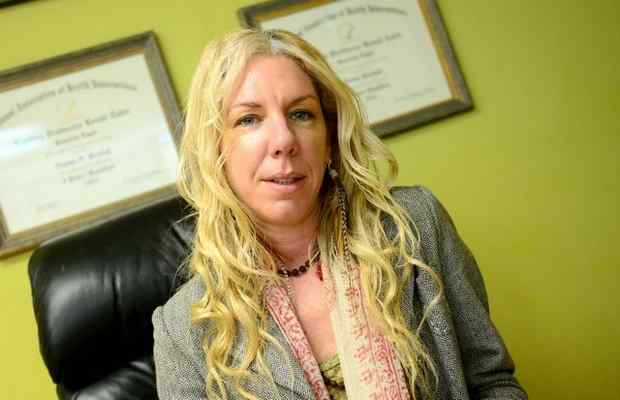 A steady stream of clients filed into A+ Insurance on Friday with a mission to accomplish: sign up for a health plan by Sunday or pay a penalty. A big one.

That’s the provision under the Affordable Care Act that brought Caley Carr, a professional tap dancer and teacher, to the Valley Village business.

“The tax penalty is a little bit like the fire that got me moving,” said Carr, 29, as he sat with an agent to discuss his plan options. “I don’t want to pay a penalty again.”

People who receive health coverage from an employer, Medicare or another government program don’t have to worry, but those such as Carr, who are self-employed and who have gone without health insurance, have until Sunday. Those who qualified and went without health insurance in 2015 may have to pay a penalty at tax time, which can go up to $325 per adult and $162.50 per child or 2 percent of the total household taxable income, whichever is higher. That rate will rise to $695 per single filer and 2.5 percent come next tax season. The penalty may go as high as $10,000 for a family of four.

Small businesses up to 50 employees also have new requirements to meet by Sunday’s deadline.

But even with those steep costs, thousands across the Golden State are still not getting the message, acknowledged Peter Lee, the executive director for Covered California, the state’s health plan marketplace.

When the first enrollment period kicked off in late 2013, there was a certain learning curve to be expected about Covered California and its federal version, HealthCare.gov, both government-run exchanges. Deadline extensions were offered and the tax penalty was smaller.

Now, with hours left in the third enrollment period, no extensions will be offered. It’s either meet the deadline by Sunday or get ready to write a check to the Internal Revenue Service, Lee said. There is only one exception: Those who start an application on Sunday will have until Feb. 6 to finish it.

A total of 1.3 million have enrolled in plans through Covered California since 2013. Not all have stayed. Some people couldn’t make the monthly payments. Premium costs in California rose an average 4 percent.

But another 4.7 million Californians qualified for Medi-Cal, the state’s version of Medicaid.

Some experts estimate that up to 700,000 Californians remain uninsured and eligible to purchase plans available on Covered California or may qualify for Medi-Cal, Lee said. Those do not include people who are undocumented and living in the state.

So far, 329,000 new enrollees signed up through Covered California this enrollment period, although the exchange’s goal is to reach 490,000.

Lee said the culture of having health insurance is changing.